Better Call Saul: The Devil is in the Details 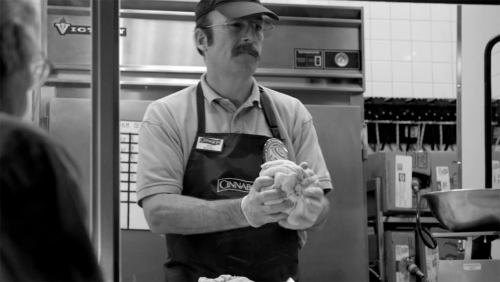 There is no better show on television than AMC’s Better Call Saul, from Vince Gilligan and Peter Gould, ex of Breaking Bad. All four seasons are spectacular, but if you haven’t watched (or even if you have) it’s worth considering what makes it great.  Great writing and acting, sure, but for me the best part of Better Call Saul is that every shot, every sequence, every episode is about intrigue- built by lensing in to the details.

Season 1, Episode 1 doesn’t start with anything as obvious as an establishing shot of a shopping mall, or a freeway sign saying “Welcome to Omaha.” Nor does it give us a clue as to who the main character is, or where we are. Instead, the black and white opening shot is a hand slathering something creamy on a surface.  We don’t know if it’s vertical or horizontal, what the substance is, or what it means that the picture is black and white.

It takes a full ten minutes of detail after detail to tell us that Saul Goodman, hero of the series, has renamed himself “Gene,” is now working at a Cinnabon in Omaha.  He’s hiding, in fear for his life, but desperately misses the man he used to be.  We learn all this with static, detail-focused shots, and not a single word of dialogue. It’s a thing of beauty.

Better Call Saul is a master class in intrigue. Every scene in the show uses carefully layered detail to  give us just a tiny bit of information– and promise even more. That forces us to think– to participate–as shot by shot the show sinks its hook further and further into our brains. It’s like watching a jigsaw puzzle, where a small section of sky or forest or face becomes suddenly visible every few minutes.

In last week’s episode, a brand new character arrives at the airport and has to follow instructions given by burner phone. He drives to a deserted country road, where he’s forced to put his luggage next to him, put a bag over his head and stand on the side of the road. Waiting.

When we finally piece together, five minutes later, that he’s an architect on a job interview for an illegal building project, the reveal feels immensely satisfying. It’s like we did all the work of figuring it out ourselves- like we experienced all the anxiety-drenched emotion of a man with a bag over his head being dragged around Albequerque by criminals.

Details, rather than dialogue, intrigue us into caring about tortured relationships and nerve-wracking suspense. We feel the characters in a way we don’t when we’re just told about them. When a sideways glance between characters feels like a huge reveal, you know you’re being played by masters.

The lesson? Details intrigue us. They let us come to our own conclusions, making the story reveal happen inside our heads. And that makes the experience much deeper and more affecting.

How can you use extreme detail in your next shoot?