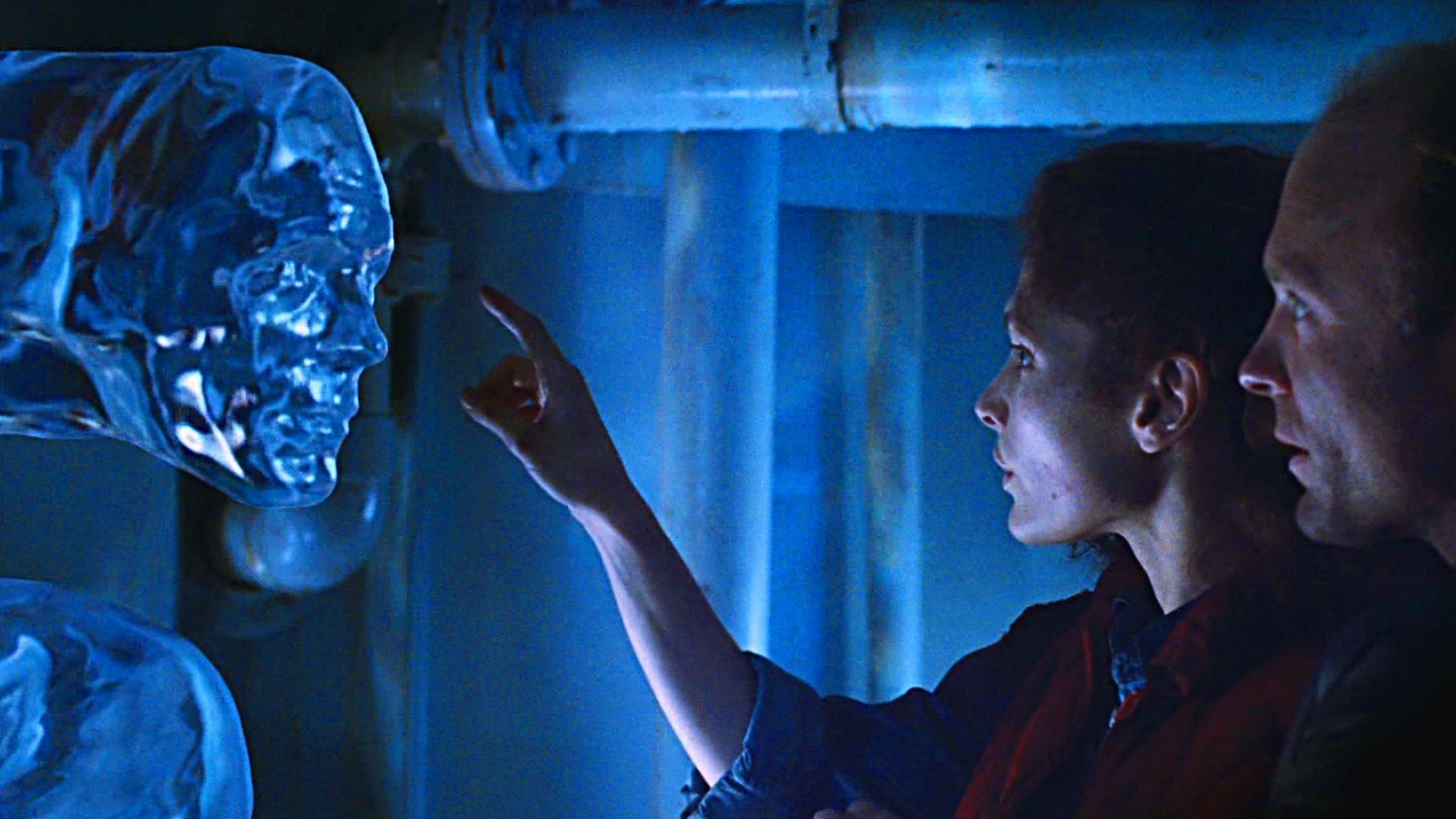 There are No Fish in “The Abyss”

My writing partner and I were arguing about a scene in a new screenplay. It’s a time-travel piece, and he wanted to explain all the technical steps that lead a character to have a conversation with someone from his distant past. The reason? So the audience would believe their meeting could plausibly happen.

Makes sense. If we don’t show how the machinery works, and explain exactly how the two accidentally meet over miles and eons, who will believe it? Credibility comes from detail, right?

It makes sense, but it’s totally wrong. Extreme explanatory detail in a movie is death. We want the audience to believe the story, not write a dissertation on it. If we write a film correctly, the audience happily buys it despite having to leap across vast detail-less gaps. As proof, I offer you: The Abyss.

After Aliens and a few years before Titanic, James Cameron wrote and directed a story of petroleum workers living thousands of feet below the ocean’s surface. When a nuclear sub goes missing, they’re recruited by the government to help rescue it– only to find that there’s an alien life-form doing mysterious things– in The Abyss. Dum dum dum…

My favorite thing about the Abyss: it takes place almost entirely on the ocean floor, but there’s not a single fish in the movie.

Technically that’s because Cameron shot most of the underwater scenes in a giant manmade tank. It was a difficult shoot, and trying to support living animals would have made it an impossible shoot. The digital technology of the day precluded layers of composite fish. Thus no fish in this underwater movie set in the ocean.

Does the script explain? Does a scientist in a lecture hall bemoan that humans wiped out all fish life? Or that an odd magnetic field repels them in this region, now known as “the fishless void?” Nope, because that would focus our attention on the missing fish. Instead the film ignores the obvious, tells a gripping action/romance with amazing digital aliens, and we never even think about the fish.

Beyond the normal audience suspension of disbelief (“For the next three hours, I will accept the existence of the Marvel Superheroes”), all films require a high tolerance for reality violations. Why is the villain explaining so much before killing the hero? Would this romance really break up over such a minor lie? Why would a creature advanced enough to visit from another galaxy not have a foolproof way to protect itself from humans? How did those soldiers get all the way across Westeros so damn fast?

As writers, we need to remember that sometimes the art is in hiding your biggest piece of nonsense in plain sight- keeping your audience engaged while gliding right past it.

Great filmmaking is magic, and for any magician, mis-direction is a key arrow in the quiver. Figure out how little information you can get away with and give them less than that. Resist explaining. Artfully treat odd things like they’re normal, and blow past them entertainingly enough to direct audience attention elsewhere.

And the next time you get stuck on a scene with tedious explanatory detail, remember: There are no fish in the Abyss.

And in a seemingly complete contradiction: Sometimes great storytelling is ALL detail- as outlined in this post about Better Call Saul.