How to Compose a Shot that Doesn’t Suck

This is my first attempt at a birthday video since reading your book. I think I am starting to understand how to make a video that someone else will want to watch.

I included shots that are not really great because I think they’re what the client (my family in this case) wants.  Did I do the right thing?  How can I make my shots better?

Tough call on the client thing, Mike.  You could assert yourself as an artist, but then your family would fire you and you’d be famililess, stuck forlornly scanning the want ads for rare openings for Dads. In this economy, nobody would blame you for caving to the man.  Or, you know, the daughter.

Since I’m no expert on family politics, let’s just focus on shots.  Great job keeping them (and the video) short and sweet.  But your videos will perk right up if you focus more on how you compose your shots.

Composition is about telling the viewer where to look by making one subject and their action the most prominent, obvious thing in the shot.

Take this shot for example. 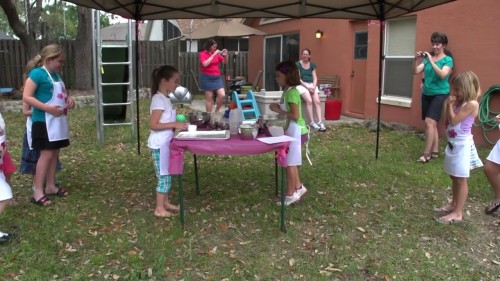 There’s not much action going on, and we have no idea where to look. We don’t know if the filmmaker wants us looking at the little girls at the table (left), the mom taking a shot (right), or the little girl watching (farther right).  Or even the women in the background.

You can fix this by making sure that each shot has a clear hero (or subject) and action, and by framing that action clearly.  That way the audience doesn’t have to guess what you want them to look at.

For example: What if you moved in closer during the party and got shots that only included exactly what you wanted them to look at?  Something like this reframing of the two girls (subjects) playing (action):

Then you cut to another clearly composed shot, this time a close-up of the little girl (subject) watching (action):

When you cut them together, you’ve told the audience a story in two shots about a little girl wishing she could play with her two friends.  Everyone knows where to look, and everyone knows what’s going on.  You can, of course, choose different shots and tell a different story.  As long as you get in close and show the audience exactly what action you want them to see.

When you’re shooting documentary style, things happen fast.  Not all of your shots will be well composed.  But if you stay close to people and keep your eye on action, you should do pretty well.  And if you look later and a shot doesn’t have a clear focus?  That’s the shot you cut.

But be careful– your family seems a little touchy.