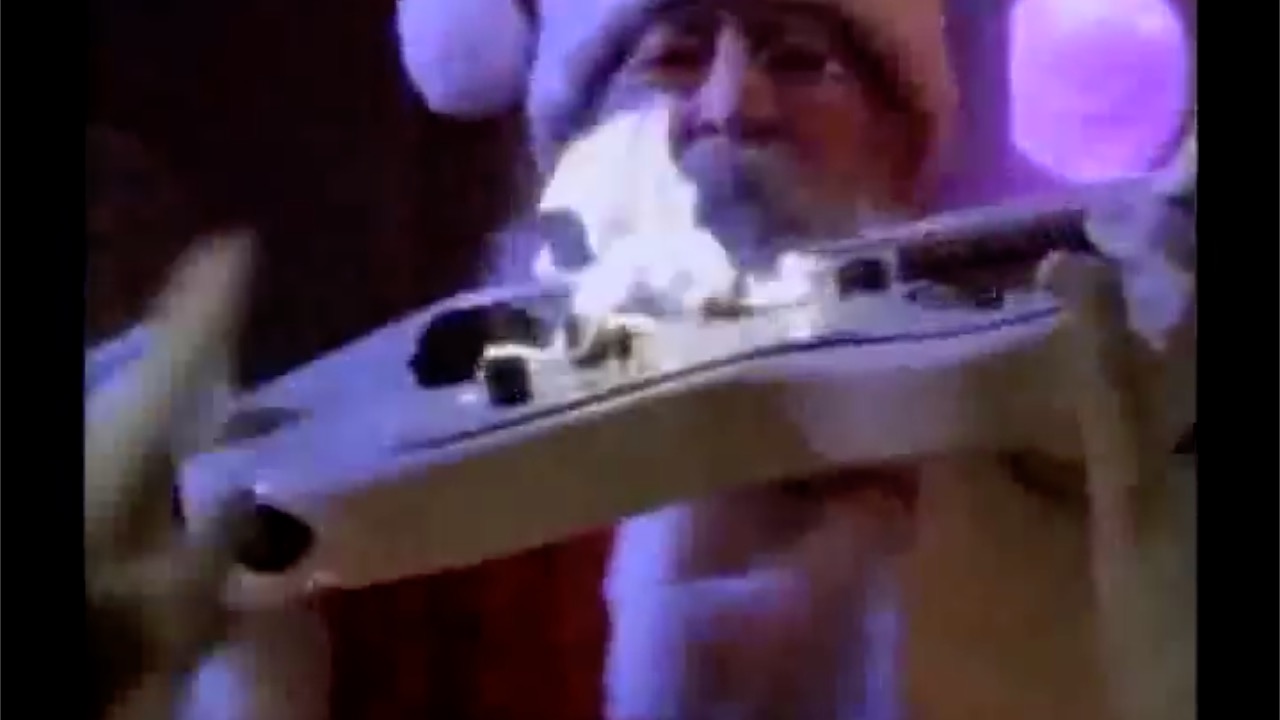 **Shameless Plug: Of course you’re buying a dozen print copies of How to Shoot Video that Doesn’t Suck for the video people in your family– but did you know there’s an audio version too?

Special bonus: Scroll down for a Christmas music video parody called “I am Santa Claus” that I created and directed for Atlantic Records and my friend Bob Rivers. There are at least 900 stupid Christmas jokes in its 4 minute run-time. And yes, I’m proud of that.

Chestnuts roasting, noses being nipped, and hours of incomprehensible video being shot of people you can’t see or hear all that well doing…I don’t know…something near a fireplace.

Fear not!  Your video doesn’t have to suck.  Here’s my checklist of the 10 steps you can follow to perfect Holiday Video.  (For even more detail, click on the embedded links):

1) Think about your story.  Stories have a beginning, middle and end.  “The night we got our Christmas Tree” starts with the family piling into the car, THEN shows us the kids walking through the tree lot checking out the Douglas firs, and FINALLY Mom finding that one perfect tree and everyone agreeing.  Beginning, middle and end.  Just thinking about how your story goes— before you shoot it– will make your video better.

2)  Shoot Action.  Every shot in your video should have a noun and a verb, just like those sentences Mrs. Cooper taught you about in 3rd grade. “Sarah whisks the gravy” is a shot. “Sarah” without action?  That’s a photograph.

3)  Shoot short shots.  You don’t need 30 seconds of Uncle Larry snoring in front of the TV after dinner. Five seconds is enough to get the point.  Which is my point: when nothing else is going to happen, it’s time to end your shot.  Practice shooting 5 or 10 seconds (of action, remember?) at a time.

4)  Shoot for the face.  Home video is always about people.  Everyone you know will look totally different in 5 years.  Make sure you capture who they are now.  As a bonus, faces are where emotion lives.  If you want to really feel your video 5 years from now, show us your relatives’ faces– well lit and close up.

5)  Zoom with your feet.  Zooming in from far away makes your shots look shaky. Walk closer to your subjects and zoom out (stay wide).  The other advantages:  1) being closer to the action involves you and the viewer in the action, and 2) the sound on your camera mic is always better closer.

6)  Pay attention to that little video window on the back of the camera. If it looks bad when you shoot it, it will not magically look better when you watch it later.  If someone’s face is too dark, move until your camera finds the light.  If they’re out of focus, fix it.  If you don’t like the way the frame looks, re-frame. Now.

7)  Interview your relatives.  We often forget to interview people at family gatherings.  But kids say the darndest things– things you’ll want to remember (and play back to embarrass them at their wedding) when they’re adults.  Grandmas say the darndest things too. And so does anyone who’s been hitting the Holiday Cheer.  Frame your questions so they don’t yield one-word answers.  “Are you excited to get presents?” gets you a nod. “What do you think about Santa Claus?” gets you a story.

8)  Represent your kids. They may be too young to shoot their own video now, but in a few years they’ll watch yours to help fill in their memories.  They’ll want to know more about Grandpa, they’ll want to see what their little friends looked like then, they’ll want to see that long-lost doll unwrapped from its Christmas box.  Great video with lots of detail is one gift that costs nothing.

9) Don’t shoot the boring stuff.  If you’re bored shooting it, you and everyone else you inflict it on later will be bored watching it.

10)  Change your point of view.  Put your camera in front of the fireplace and shoot back at the living room.  Shoot on your knees at kid height.  Put a GoPro on top of the tree.  Or in the refrigerator.  Get creative.  Have fun!