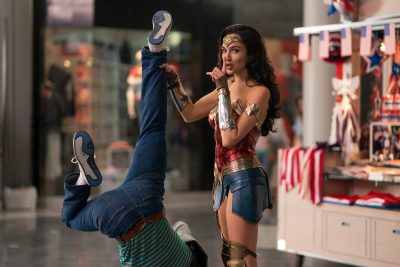 Why You Were Disappointed in “Wonder Woman 1984”

There are many reasons to be disappointed in Wonder Woman 1984. To name a few:

The rules of the no-good-very-bad wishing stone are, shall we say, fluid, and seem to change scene by scene. Anachronisms abound (Starbucks-style coffee sleeves! Full-color CRT monitors!) The bad guy looks much better when he’s wearing a suit of armor, but they don’t give him one. The hero does not, but they do. And worst of all: the filmmakers saw Cats and thought “Purr-fect! We must have those special effects for our next blockbuster!”

None of these disappointments would have mattered nearly as much if the movie didn’t commit the biggest sin in all of storytelling: cutting the legs out from under its hero at the most important moment of the film, leaving a giant structural hole no amount of ’80s art direction can fix.

A Hero’s decisions power a well-told story. If Bruce Willis (to stay in a Christmas motif) does not decide to climb the Nakatomi towers, there is no Die Hard. If he doesn’t decide to walk over broken glass to get to the top, we don’t feel his struggle. If he doesn’t decide to risk his life and use every ounce of his remaining strength to power his way through the climactic battle, we won’t care if he kills Alan Rickman.

The audience signs up for an emotional ride: to watch a hero gets themselves into trouble and then, through torturous, super-human struggle, back out of trouble. Living that struggle with them keeps us wanting to know how it turns out at the end. Whether they screw up or succeed. Live or die. The bigger the trouble and the harder they struggle, the more we care how they do. If they struggle and succeed, we feel great. If they struggle and fail, we are destroyed (in a very good way—that’s tragedy.)

But if the struggle is taken away from them, then we don’t care. We don’t empathize with the pain or feel the triumph. Instead, we feel like we wasted two and a half hours we’ll never get back. Which is exactly how you will feel after watching Wonder Woman 1984.

As clunky as the film is, at its heart is a very compelling dilemma: what if your biggest, deepest, most heartfelt wish came true– but the only way to save the world was to give that wish back? Worse, what if giving the wish back meant the death of the person you loved most in the world? That’s a really huge question, built for struggle and angst. It’s perfect for a massive, operatic, spellbinding, emotionally affecting story. We very much care how our hero gets through this one.

But when we get to the moment in the film where Wonder Woman realizes that her only way to save the world is to kill the man she loves (again)– the man she deserves to be with– the writers whiff the ball. Face to face with this wrenching dilemma, at the moment we want to see our hero take action, she doesn’t. Instead, the writers commit the cardinal story sin of taking the key story decision away from their hero.

In that big, emotional turning point of the film, Chris Pine’s not-the-title-character turns to Gal Gadot’s Wonder Woman and tells her he’s going. She whines. Then he tells her again. They kiss and she walks away. We don’t see her make the decision because she doesn’t. We don’t see her struggle. We don’t even see him die in this, what should be the most breathtaking, emotionally pitched moment of the film. She nods and walks away and he’s—presumably– gone.  And just like that all the air hisses out of this movie.

The filmmakers have taken a female icon, a SUPERhero, who in the first film single-handedly jumped out of a foxhole during a firefight, crossed no-man’s land and saved a French town—and let her boyfriend mansplain to her what she “has to do.” And she does it. This disempowers a woman who is not just the hero, but a superhero. And if she’s not the decider, why should we bother watching? We no longer care about what happens next.

This is not only a structural error, but a monumental, culturally tone-deaf structural error for a film about a female superhero. In the living room I watched in, everyone was angry– but especially the women who loved the first movie because it showed a just, powerful woman kicking serious ass on screen.

This isn’t the only film to undercut its female action hero in the climactic scene. My favorite example before this was 1994’s River Wild, in which Meryl Streep spends the film being tortured by Kevin Bacon, only to have David Straithairn pop up magically at the end to kill him for her. But of course that was 26 years ago.

It’s also not the only superhero movie to undercut it’s lead and weaken the film. When the big-money sequel pressure is on, it’s hard to stay the course and make a great movie.

Fortunately, even if Wonder Woman 1984 doesn’t work, it does provide Story 101 lesson for the rest of us. Let your hero get into big trouble, really suffer, and the audience will love you when she figures out how to get out of it– all by herself.